I do believe that clocks don't have the same place in people's hearts as they used to.  In all of the "old"  houses you will see at least three or four clocks, some of them not working and haven't done so for quite a while.  There was a time when you couldn't have enough clocks in the house; one for the kitchen, one for the living room, one for the hall, one for the parlour, and, don't forget the alarm clock beside the bed going tick tock tick tock all night long.

Nowadays, clocks no longer feature as part of the general decor of the house.  They've been put in their place which is either on the mobile phone (in which case they can hardly be called a clock) or up on the one wall in the house which is where you are going to be able to see it.

So when I say their days are numbered, I don't mean Heartworks' clocks because our clocks are meant to be adornment rather than functional.  We never set out to make clocks.  Our aim was to make beautiful functional "pieces".  Do you see any numbers on our clocks?  No, you don't.  You have to work hard at telling the time on our clocks because what's more important is that the "piece" is harmonious  with its surroundings, that it is an attractive ornament on the wall or on the mantel piece.  It's giving that piece of slate a new life.

More and more people come up to us at craft fairs and their first comment is to say that they want to buy a present for someone but that they don't know if a clock is a good idea.  Then, upon reflection, they "get it", they get the fact that these are not just clocks, rather an ornamental piece made out of recycled material, a piece of modern craft unique in design and A1 in terms of  quality and nine times out of ten they buy it too.

So although the days of clocks, in general,  are numbered, ours are not and there are no numbers on our clocks to prove it!! 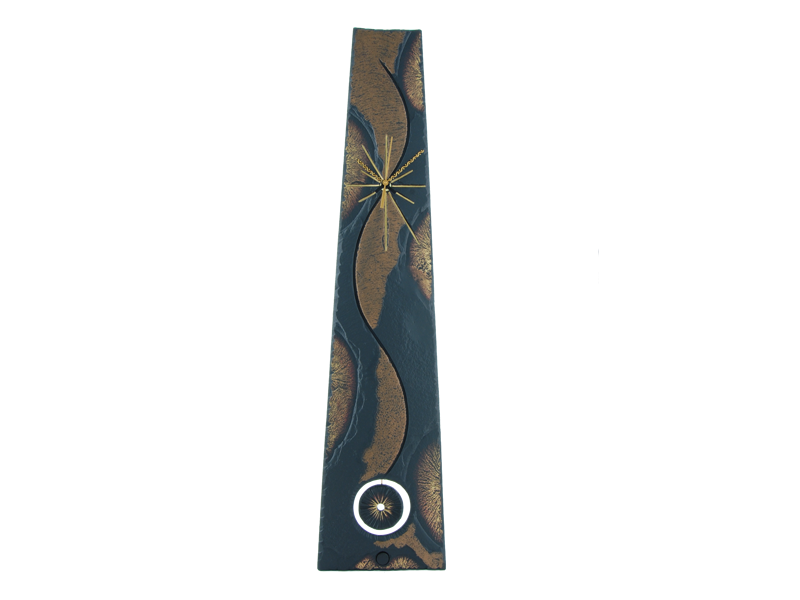